This ‘making of’ tutorial covers how to deform a head model into a surreal shape using the L3 Deformer plugin from Lightstorm3D (purchase required). This toolset is a collection of advanced deformation nodes and utilities for Maya. We will focus on the Collision Deformer in this tutorial. We will then move onto shading and lighting the head model to create a convincing photographic portrait look to our render. We will use the alSurface shader to add skin shading to the model with Arnold. Arnold can make use of 3rd party shaders such as the alShaders by Anders Langlands. This collection of shaders will need to be installed prior to starting this tutorial. Further examples using this technique can be found here.

This tutorial is divided into the following sections:

Make sure that the L3 Deformer plugin is installed correctly and loaded in the Maya Plug-in Manager before starting this tutorial.

The Collision Deformer allows you to collide objects with polygon geometry, using projected collisions such as directional, concentrical and cylindrical.

The Collider node comes with some extra attributes aside from specifying the type of projection. You can choose between inward and outward projection for concentrical and cylindrical projections. You can also specify which side of a polygon to consider during collision detection (frontal, posterior or both). Soft depth and resistance attributes simulate the effect of soft collision geometry that can be compressed to some degree.

In this tutorial we will use the default concentrical collider setting, but we will alter the Soft depth and resistance values to achieve a smoother deformation effect. 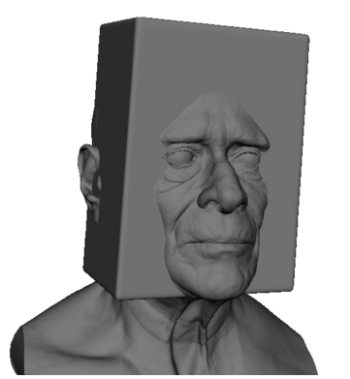 The deformation effect currently looks too angular. We will need to change some of the default Collision Settings to give a softer merge between the head and the cube. 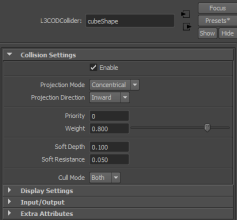 Below you can see the difference when rendering with the SSS modes: Cubic and Directional. The difference is subtle, but Directional SSS is generally recommended for skin as it has less of a ‘waxy’ appearance.

For final rendering increase all light Samples to 3 and increase Camera (AA) to 5 or 6. The SSS looks a little noisy with SSS Mode set to Directional using the default settings. Try increasing the SSS to 3 or 4 for the final render. Beware that increasing SSS samples can have a large impact on render time.

Applying Auto Tone to the image in Photoshop adjusts the tonal values and gives a more pleasing ‘photographic’ look to the render. Remember to convert the image to 8-bit prior to using Auto Tone.

That concludes this making of tutorial. Why not have a go at producing some bizarre and surreal head shapes using this technique!